The Capital Medical Society is pleased to announce Dr. John Mahoney as the recipient of this year’s Outstanding Physician Award. This award honors a physician who has been a leader within the field of medicine and political activities while demonstrating clinical excellence, and actively contributing to the education of future medical professionals. 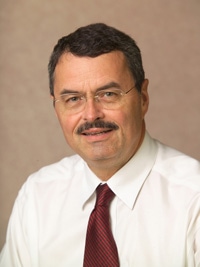 Dr. Mahoney is a recently retired board-certified anatomic, clinical, and forensic pathologist. He was born in Kalamazoo, Michigan, and spent most of his adult life in Florida.

Despite Dr. Mahoney’s early career interest in oceanography, he followed his physician brother’s example and decided to pursue medicine. He attended the University of Florida for his undergraduate, medical school, and internship and residency in anatomic and clinical pathology. Many years later when the local physician community was in need of an advocate with administrative credentials, he earned a Master’s Degree in Business Administration from the University of South Florida while also practicing as a full-time pathologist.

In 1978, Dr. Mahoney started his pathology career at University Hospital in Jacksonville, FL, but quickly relocated to the University of Missouri Medical Center where he supervised then pathology resident, Dr. Charles F. Manning, Jr. In 1981, Dr. Ben Turner, a pathologist at Ketchum Wood & Burgert Pathology Associates, recruited Dr. Mahoney to join the practice. He quickly gained the respect and trust of his colleagues and our local medical community.

Dr. Mahoney was an early supporter of the FSU College of Medicine (FSU COM). Since 2003, he has been a Clinical Professor of Pathology at FSU COM. During his career, it wasn’t unusual to see a resident or aspiring college or medical student sharing his double-headed microscope. “Having a student entails at least twice the effort to complete daily tasks,” said Dr. Charles F. Manning, M.D., his longtime friend and colleague. “But the students sought him out as his reputation as a teacher was renowned.”

His leadership with Capital Medical Society began in 1989 with him serving as President. Since 1991, he has actively served as a Capital Medical Society delegate at the Florida Medical Association Annual Meeting and has often been selected to serve as a member or chair of several FMA Reference Committees and the Credential and Rules Committee. He continues, as he has since 2002, to lead the Capital Medical Society Foundation (CMSF) as their President. CMSF’s mission is to support the charitable efforts of physicians and others, increase access to healthcare, promote education and serve the community’s health needs through innovative projects that are exemplary, affordable and dignified. CMSF has continued to operate the We Care Network, a network of volunteer physicians, dentists, hospitals, and allied health professionals in Tallahassee who donate specialty medical and dental care to low-income, uninsured patients from Leon, Jefferson, Gadsden, and Wakulla Counties. In addition, CMSF also provides scholarships to deserving medical students enrolled at the FSU College of Medicine and CMSF provides modest grants to local non-profit agencies and organizations to support their programs that assist with increasing access to healthcare for the underserved. During his tenure at Pathology Associates, Dr. Mahoney was a loyal donating provider in the We Care Network. Since 2006, he has served as an auctioneer at the CMSF Holiday Auction, alongside Dr. Scott Sellinger, raising funds to support the mission of CMSF. “Dr. Mahoney continues to serve tirelessly to advance the mission of CMS Foundation. Under his impeccable leadership, the Foundation Board continues to improve access to health care and to position themselves to explore innovative ways to positively advance their mission,” said Pam Irwin, Executive Director.

Dr. Mahoney and the CMS Foundation Board of Directors recognized the biggest challenge that physicians face today is burnout. Dr. Mahoney’s personal experience of journeying through a medical malpractice lawsuit, for which there was eventually a verdict of no evidence of negligence on his part, makes him a strong advocate of physicians seeking help when the stress of life becomes unrelenting. He wants physicians to know that they are not alone, and they are not invincible. “It’s a wonderful life and an honorable profession,” he emphasizes as he encourages his colleagues to not go it alone. Under Dr. Mahoney’s leadership, the CMSF Board organized the creation of the Physician Wellness Program in 2017 to provide six free, confidential in-person wellness coaching sessions each year by licensed psychologists to Active and Associate Capital Medical Society Members.

In addition,he has held numerous other leadership positions within the local medical community. He served as President and Chief Executive Officer of Healthplan Southeast and guided them through an extensive period of growth to supply healthcare for 62,000 members. He successfully negotiated a merger with Coastal Physician Group and served on its Board of Directors for two years. He was also Chief Medical Officer for Tallahassee Memorial HealthCare (TMH), Chief Integration Officer and Senior Vice President at TMH in charge of Tallahassee Memorial Physician Partners, Medical Director of the TMH Department of Pathology Laboratory, Chief of Staff at Tallahassee Community Hospital (now known as Capital Regional Medical Center), and Associate Medical Examiner in the State of Florida District 2. He currently serves as a TMH Foundation Board trustee.

His immense skill set has been recognized by non-medical organizations with whom he shares his talents including Tallahassee Area Chamber of Commerce, Rotary Club of Tallahassee, Maclay School, The Artist Series, Elder Care Services, and the National Music Museum. “John is a recognized leader within and outside the medicine community who has been generous in sharing his time, expertise, judgment, enthusiasm, and resources,” said Dr. Charles F. Manning, Jr. “Despite being recently retired, he continues to lend his energies to the affairs of our community, both medical and local.” Described as a “Renaissance man” by his colleagues, his myriad of talents, interests, and enthusiasm to try new things and tackle new challenges has served our community for decades.

Dr. Mahoney has a deep appreciation and love for stringed instruments. Triggered by a random sign advertising, “Violins For Sale,” by a local violinmaker, he not only purchased a violin, he also took lessons. He became accomplished enough to play in the Big Bend Orchestra. However, his interests moved beyond playing the violin. During his travels, he began to collect rare, historically relevant violin books. His collection grew so much that he used to operate Mahoney’s Books from his home. After storage capacity for his collection became problematic, he researched options for the donation of the collection. In 2007, he and his wife Barbara donated a 6,000-volume set of historical works documenting stringed instruments including violins, bows, and their makers to the University of South Dakota School of Music Library, now known as the National Music Museum. Their contribution, known as The Mahoney Music Collection, provides a cornerstone for the Library.

Dr. Mahoney and his wife Barbara, who he affectionately calls “Barb,” have been married for 46 years. They are the proud parents of four sons, Jason, Josh, Jon, and Joe, their beloved spouses, and eleven grandchildren. Dr. Mahoney and Barbara are the quintessential world travelers as they travel widely and often. Many times their adventures include colleagues who have become dear friends. Their next adventure later this year will take them to Provence and Paris.

Aside from traveling, Dr. Mahoney enjoys reading, gardening, especially weed pulling, walking, playing piano, and researching literary people and institutions. When asked what has been the best part of retirement, he enthusiastically responds with, “Every day is Saturday!” After a fast-paced 39-year career, a few extra Saturdays are well deserved.

On behalf of all those associated with the Capital Medical Society, congratulations to Dr. John Mahoney. He certainly exemplifies what we consider to be qualities of an outstanding leader and physician.

Sidebar: “Books that can be held in the hand and carried to the fireside are the best after all.” - Edward Heron-Allen, F.R.S.