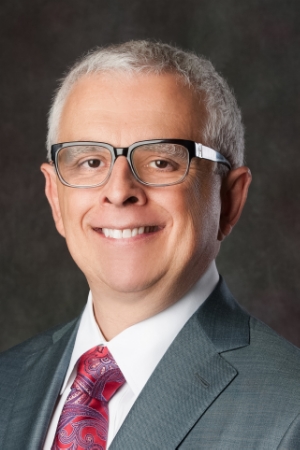 The Capital Medical Society is pleased to announce Dr. John Katopodis as the recipient of this year's Outstanding Physician Award. This award honors a physician who has been a leader within the field of medicine and political activities while demonstrating clinical excellence, and actively contributing to the education of future medical professionals.

Dr. Katopodis is board-certified in Cardiovascular Disease with added qualifications in Interventional Cardiology. He was born in Athens, Greece, and moved to the United States at the age of six. He was immersed in medicine throughout his childhood through his father’s family in Greece. His grandfather was a family practitioner and his uncle was an ophthalmologist. His father and mother were both involved in medical research and medicine was constantly discussed at home. Dr. Katopodis knew he wanted to be a doctor since the first grade. He vividly remembers his uncle’s happiness after long clinic days, and his uncle’s determination to do whatever he could to help his patients. Dr. Katopodis yearned for this same feeling in his future career and was committed to doing whatever it took to become a doctor.

In 1996, Dr. Katopodis helped the Florida State University (FSU) athletics department develop its cardiac screening program for athletes prior to their participation in sports at the University, and he also assists them when players have cardiac issues. Over the years, he has worked with dozens of athletes and continues to do the primary cardiac screening of the athletes. Most recently, the women’s soccer team awarded him a championship ring for his work with the team.

In 1997, he and several cardiologists from across Florida collaborated to bring cardiovascular clinical research to some community hospitals in Florida. The group founded Clinyx, LLC, which functioned as a cardiology research site management organization and helped jumpstart several cardiology clinical research programs in community hospitals in Florida. The company was successful and several of the original sites ultimately were able to become standalone research centers.

In 2004, he and the other physicians of Southern Medical Group founded the Tallahassee Research Institute (TRI), which collaborates with TMH to bring advanced clinical cardiovascular research trials to the area. Dr. Katopodis served as President of TRI for the first three years and Vice President for 11 years. Since its inception, TRI has been involved in many landmark IDE and pharmaceutical trials and has been involved in over 70 clinical research trials overall.

Dr. Katopodis has been actively involved with the Florida Medical Association (FMA) since 1999. He first joined the FMA in 1989 while he was working in emergency medicine in Miami because he thought “joining the FMA was the right thing to do.” He became a delegate to the FMA House of Delegates for the Capital Medical Society (CMS) in 1999. At that time Jeb Bush was running against a trial lawyer friendly candidate for governor. Dr. Terry McCoy, now past President of CMS and FMA, approached Dr. Katopodis to raise funds for the Bush campaign. Dr. Katopodis was already very concerned about what the trial bar was doing to the medical profession and ended up raising a lot of money for that event. The FMA Political Action Committee (PAC) leadership noticed this achievement. Dr. Tony Weaver, past president of CMS, was a PAC Board member at the time and asked him to join the FMA PAC. In 2000, he joined the FMA PAC Board of Directors and was quickly made chair of the 1000 Club, the fundraising arm of the PAC at the time. During his tenure on the leadership team of the PAC, he helped redo the PAC bylaws, was involved in restructuring how the PAC raised money, and by the time he became PAC President in 2011, all fund raising records for the FMA PAC were being broken.

In 2007, his mentor, Dr. Karl Altenberger asked him to join the FMA Board of Governors, and Dr. Katopodis was elected to the District A seat of the Board that year, and also served as the at large member of the executive committee of the board for the next three years. The FMA was undergoing an internal restructuring at the time, and with Dr. Altenberger’s mentorship, Dr. Katopodis played a central role in that process which was ultimately enshrined in substantive revisions of the FMA bylaws, policies, and procedures.

Dr. Katopodis served on many FMA and FMA PAC councils and committees over the years and became the 141st President of the FMA in 2017. During his tenure as President, the opioid crisis and physician wellness dominated the discourse of his presidency. As a result, the FMA launched the Opioid Resource Center, Physician Wellness Resource Center, and EHR Resource Center on the FMA website. He spent most of his presidency traveling across the state supporting physician wellness programs and educating physicians and their spouses about physician burnout. Although Dr. Katopodis never aspired to become FMA President, he made it his personal mission to promote the medical profession, support physicians, and do whatever he could to make the Florida Medical Association as strong as possible.

Locally he founded the Cardiology Case Review Committee at TMH, has been a member of the Institutional Review Board at TMH, and board member on the Board of Directors for The Heart Institute at TMH. He has also served on the Tallahassee Rotary Club board, and has served on the Parish Council of the Holy Mother of God Greek Orthodox Church. While on the Church board, he spearheaded the construction of the church’s recreational hall and kitchen, a $1.2M building project. He has also been a volunteer physician in the Capital Medical Society Foundation’s We Care Network for many years and is actively involved in teaching FSU medical students as clinical faculty.

He is a loving husband to his wife of 6 years, Evi, and a proud father to three children, Christina, Niko, and Nonda. Simply stated by Dr. Katopodis, “my wife, Evi, and my children, are the most important part of my life and they supersede everything else.”

In his spare time, Dr. Katopodis enjoys spending time with his family, skiing and cooking. This will likely come as a surprise to most, but Dr. Katopodis relishes the moments to and from work when he can blast the radio at one decibel lower than rattling the license plate to his favorite music genre, dance electronica. A few of his favorite musicians are Steve Aoki, Pitbull, Nicki Minaj, Calvin Harris, and Flo Rida. The ring tone on his phone is Alexandra Stan’s Mr. Saxobeat. While listening to his favorite music genre and musicians, he wraps himself in the wise words of ancient Greek philosopher Plato, “Music is a moral law. It gives soul to the universe, wings to the mind, flight to the imagination, and charm and gaiety to life and to everything.”

On behalf of all those associated with the Capital Medical Society, congratulations to Dr. John Katopodis. He certainly exemplifies what we consider to be qualities of an outstanding leader and physician.